Nomi Epstein is a Chicago-based composer, curator, performer and music educator. Her compositions center around her interest in sonic fragility, where structure arises out of textural subtleties. Her music has been performed throughout the US, Europe, and Asia by such artists as ICE, Ensemble SurPlus, Mivos Quartet, Wet Ink, Dal Niente, Noble Fowl Trio, Quince Vocal Ensemble, Rhymes With Opera, Seth Josel, and Eliza Garth, and at festivals such as Ostrava Days, Huddersfield Contemporary Music Festival, Darmstadt, Bang on a Can, and Akademie Schloss Solitude.  She has contributed works to Australian flutist Janet McKay’s 2009 US tour “Those Vanished Hands,” guitarist Aaron Larget-Caplan’s “New Lullaby Project” and percussionist Joe Bergen’s new vibraphone collection “For Semy.” She was twice invited as an Artist-in-Residence at the Atlantic Center for the Arts, and has received grants from The Foundation of Contemporary Arts (Emergency Grant), Chicago’s DCASE (Individual Artist Grant), and New Music USA (CAP Grant).  In 2016, she was awarded the inaugural Staubach Fellowship for Darmstadt.  She was featured in the Chicago Tribune for her work as a composer, curator, teacher, and performer.

Epstein is an active and passionate curator and producer, founding and leading a.pe.ri.od.ic, the critically acclaimed experimental music performance collective devoted to notated, acoustic, post-Cagean experimental music.  In 2012, she curated and produced the 5-concert John Cage centennial festival in Chicago involving performers, sound artists, dancers, and multi-media artists from around the Midwest.  Her work with Cage’s music and influence led her to present at numerous centennial events. She was invited to present at the Northwestern University Cage Symposium and serve as composer-in-residence at the Florida State University Cage Festival.

In 2014, Epstein co-organized (with Peter Margasak) The Chicago Wandelweiser Festival which brought Jürg Frey, Eva-Maria Houben, and R. Andrew Lee to Chicago for the 4 festival events.  The festival featured a.pe.ri.od.ic’s debut album release concert, a cd of ensemble works by Jürg Frey on which Epstein performs.  In 2017, she co-organized (with Shanna Gutierrez) the first US large-scale festival of the music of Galina Ustvolskaya, 'Power In Sound,' a 3 day festival in conjuction with a conference organized by the U of Chicago/UIC 'Found in Time: Forgotten Experiments in Soviet Arts.'

As an educator, she has served on the faculties of the University of Illinois at Chicago, Northwestern, DePaul and Roosevelt Universities, and in 2016 served as Visiting Assistant Professor of Composition at the University of Iowa.  She has been the head of theory at the British School since 2007.  Epstein holds degrees from Columbia University, New England Conservatory, and Northwestern University.

I am interested in sonic realms which focus on timbre, and often carry out timbral interplay over time.  I conceive of these sounds and structures as tangible and tactile objects which offer an exploration of sonic elements without expressive, gestural objectives.  My works consist of textures which remain both regular and irregular in their rhythmic, melodic and orchestrational representations.  Contrast between elements are generally subtle and without extroverted qualities.  Notational practices combine different forms including traditional and graphic,  spatial, and text conventions. 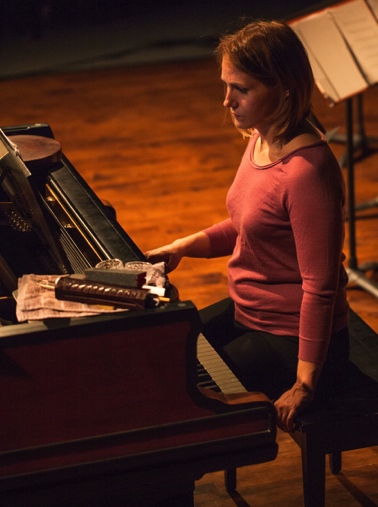