Commissioned by Laura Steward/Sam Pluta for

"Quiet Qloister takes its inspiration from the acoustic function of the fountain and features two interrelated subtle sound worlds that form sonic and temporal dialogues with one another."

A unique and sacred space, the swift cloister borders the divinity school and sits next to Bond Chapel. An unusual cloister, as instead of being fully enclosed, it remains open to the larger university quadrangle. Still, it captures the sentiment of a cloister with its ability to calm and quiet the visitor. A feeling of escape, of seclusion is furthered by the fountain which sits in the middle of the cloister. The fountain involves two large square shaped limestone boxes, which each have 4 spouts of water. If one looks at one of these limestone boxes from a birds eye view, one will notice that the about half way down on the inside are 4 carved out circles making a place for each spout.  Each spout bubbles above the surface of the water, and each fountain has a carved out lip which the water pours over to a low tunneled byway connecting the two boxes. In the center of the tunneled byway is a covered circular stone formation where the water bubbles again. The sound of the fountain’s water was clearly a central method of separating it from the space outside of the Swift Cloister area. It acts as the fourth wall of the cloister as it sonically buffers the sounds coming from the rest of the quadrangle.

My installation echoes the cloister designers intention in that it remains a quiet, protected space where people can sit and contemplate, can gather to talk, have a coffee/eat lunch, and can feel a sense of separation from the bustling energy of the rest of campus. The sound of moving water is the central point of inspiration: After making several hydrophone recordings at different points/depths of the water in both the fountains and basin, I used only these sounds to create a fixed media piece for the installation.

At various times the installation also features the live feed from one hydrophone placed in each fountain which capture the live sound of water from within the fountain. This sound is minimally processed. The installation features two related sound worlds- that of the fixed media piece and that of live fountain sound. Sometimes these two sound concurrently, at other times one eclipses the other, and at other times, only one sound world is present. 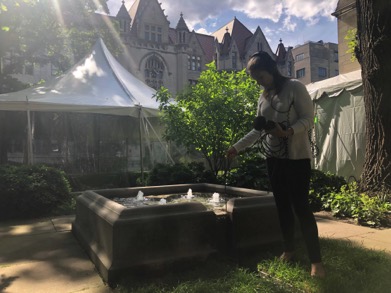 Pictured above is the Swift Cloister Garden- one of my absolute favorite spaces in Chicago, and a shot of me recording the sounds of the fountain with a hydrophone (waterproof microphone) back in June.  It was these sounds that I used (cut up, layered, and manipulated) to create the sound installation.